After our Kyoto trip, we circled back around Japan towards Hakone. Hakone is a town near Mount Fuji and famous for its scenery. While there, we stayed in a ryokan (accommodation #4) up in Gora (which is a town above Hakone and you need to take a rail in order to get up there). A ryokan is a typical Japanese inn (think of the cute hotels with the hot springs you see in every anime where everyone is wearing a yukata).

Our ryokan was so cute and clean. It had two mini private onsens, free popsicles, a collection of DVD movies free to borrow, and free yukatas while staying there! 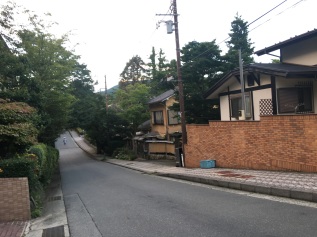 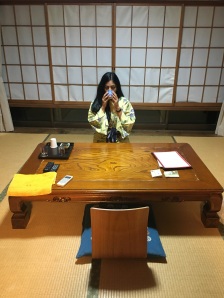 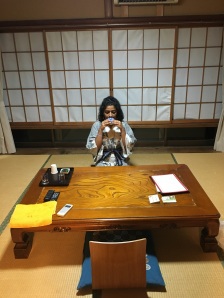 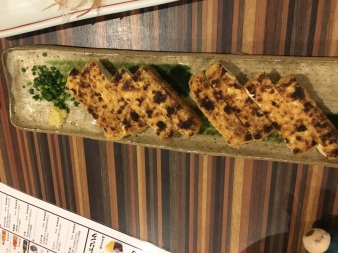 On the way to Hakone, we sat across this Japanese couple on the train and they started making conversation with us in Japanese. We talked for a while and we again got the “nihongo ga jyouzu” comment. They told us about their family and asked what we did and what we came for. I tried to explain to them that I am doing my PhD but apparently that term doesn’t translate so I tried to explain that I was a “daigakuin-see” (grad student) and that “sensei ni naritai” (“I want to become a teacher”), but the kind that ends up with a Doctor title. After trying to explain that I wouldn’t be healing people, I think we finally settled on the explanation of “daigaku de oshietai” (“I want to teach at college”) since this is eventually what I would love to do. This was the middle ground we achieved. 🙂 In any case, even after this struggle, they were so amazed at our Japanese and even more so that Aparna had learned all her phrases from anime! It’s an interesting phenomenon when people’s first instinct is to talk to us foreigners in Japanese and are then shocked that we can actually speak it. 🙂

On one of the days, we decided to hike all the way to the famous Lake Ashi (Ashi-no-ko). It was a long trek but apparently a very historic trail. The trail was part actual highway road and part forest trail. At some point, we even took a bus to cover part of the trail. 🙂 Since I had been in Japan for about two weeks at the time, I was exhausted, while Aparna was still fresh from her one week in Japan. I remember walking slowly at some point and these two American guys passed me and said “You can do it!” to which I replied, “I’m trying!”. Along the way, we stopped at this famous tea house called Amazake Chaya. We met the sweetest lady named Kotoko who was shocked (like most people) that we could speak Japanese. Apparently, she had lived in Seattle in the US about 15 years ago which is where Aparna lives and I lived for one year. She ended up speaking Japanese with us for the rest of the conversation (which was awesome, since usually when someone knows English, they want to speak it with us) including saying the price in Japanese. As we were leaving, she gave us two cards with good wishes on them written in Japanese and told us to be safe while finishing our hike!

On the hike to Ashi-no-ko 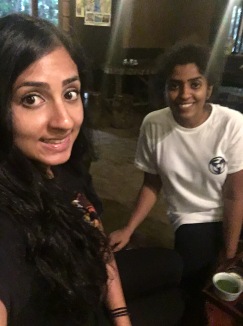 At the cute tea house

Adorable tea house we stopped at

We finally made it to Ashi-no-ko just when it started to get really cold and started to rain. But man was it beautiful! The Torii gate at the entrance of Hakone Shrine reminds me of the Akatsuki hideout entrance in Naruto Shippuuden (Can anyone tell I love Naruto? Not sure if I mentioned it enough times).

After our hike, we decided we were too exhausted to do anything that involved more physical activity. We went to a Lawsons store, bought a bunch of snacks and sweets, and went back to our ryokan. Once back, we decided to go to the onsen for a mini night-time bath (at this point, we are used to bathing naked next to each other after Osaka). We then put on the yukatas provided to us, picked up the ‘Kramer vs. Kramer’ DVD from the DVD library, and watched the movie in our room in our yukatas while eating a ton of snacks. It was a great night. 😀

Throughout the rest of our Hakone trip, we also realized we had a few GB left in our pocket wifi and the trip was almost over. Therefore, we tried to use it up given that our ryokan didn’t have wi-fi and also watched ‘The Girl who leapt through time‘ or ‘Toki o kakeru shoujo‘. BTW, go watch that movie if you haven’t seen it!